"Of Mice and Thieves" is a contemporary novella that takes place in a hypothetical near-future Pittsburgh.

When his proposal for rodent mind control gets passed over, wanna-be mad scientist Alex turns to alternative sources of funding. To continue his research, he poses as an exterminator, using his mice to steal valuables from unsuspecting owners. When a ruthless mob boss gets his hands on Alex’s research, he quickly proves what a man with endless ambition and no principles can do with mind control. Alex must team up with a discredited conspiracy theorist cop—and his pet mouse—to put an end to the mob boss’s unchecked crime spree, before his runaway research costs him everything he holds dear. 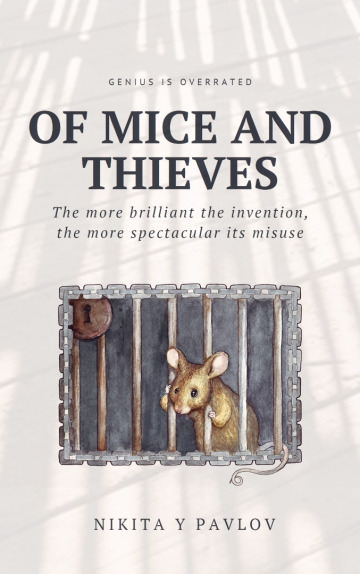 Of Mice and Thieves

“Thank you for coming on such short notice.” The plump bespectacled woman enthusiastically shook Alex’s hand before he even crossed the threshold. “I swear, those filthy pests haven’t given me a moment’s peace. I can hear them at night. I can feel them scurrying in my office. It’s a nightmare!”

“Rest assured, ma’am, that Laskin Exterminators prides itself on accuracy and effectiveness.” Pausing to don his workman’s plastic booties, Alex squeezed past her, his trained eyes quickly evaluating the apartment. Comfortable and practical furnishings, yet with a certain degree of desperate flair that tended to inflict people of middling age alongside the realization that they are no longer the carefree, party-going whipper-snappers of their bygone youth. “Now, how long would you say you’ve had the pest problem?”

Letting the woman prattle on about her panic attacks and interrupted mealtimes, he slowly circumnavigated the apartment as he inspected cracks in the flooring and baseboards. The unassuming abode had two bedrooms, one of which also served as an office. A colorful partition in the faux Japanese style hid the rest of the living space from the computer’s ubiquitous webcam. Judging by several plates of stale toast and a row of mugs of cold coffee arrayed alongside the monitor, it didn’t take Alex long to surmise what led to the mouse infestation.

“I will start in the bedroom, ma’am.” Alex placed his heavy metal box beside the door. Other than a proud “Laskin” logo emblazoned on the front, the two-foot box could have doubled as a spaceship in a bad 50’s sci-fi movie for all its lack of identifiable features. “Now, here’s the thing about mice. They are incredibly sensitive to scents and sounds. You could be sleeping in your bed, and they would still hear your breathing as they scurry about in the kitchen. I have some proprietary pellets I use to lure them out, but I’m afraid I’m gonna have to ask you to step out of the apartment for a few hours while I work.”

“Oh.” The woman cast a longing gaze at her workstation. “Are you sure there’s no other way? Poison, maybe, or…”

Alex shook his head. “We don’t use those antiquated methods at Laskin Technologies, ma’am. Poison works indiscriminately, targeting household pets and, heaven forbid, even children. Imagine the fuss when a mouse eats some poison, crawls back into its hidey-hole, and expires. Soon you have a decomposing rodent smell blown by air vents all over the apartment. Inevitably, it leads to maggots, flies, and worse. You’ll end up having to knock down your walls just to find and extract it. I assure you, our method is far less invasive. We lure the mice out,” he patted the metal box affectionately, “transport them outside the city, and dispose of them in a humane and effective manner.”

“Right, of course, very well.” The woman flushed as she nodded repeatedly. “I suppose I can take an afternoon off work… let me just fire off a quick email.” She pattered to the computer, where her fingers erupted in a staccato of practiced keystrokes.

“And you said your husband and children are out as well for the afternoon?”

“Huh? Oh, yes, they’re at school,” the woman said absent-mindedly, her attention clearly absorbed by the bright pixels in front of her. “Now, what about yourself? Won’t the rats… I mean, mice… er…”

“Very astute observation, ma’am. Rest assured, I will be outside the apartment as well. You won’t have to worry about leaving a strange man alone in your home.”

Alex quickly waved away her objections. “All part of being a professional, ma’am. Let me just set up this cage before I walk you out.” He pulled out his phone, quickly pushing a few buttons. The front of the metal box silently slid open, revealing a shiny metallic interior. “I’ll be waiting for you in the park outside in, say, three hours?”

“Sounds great.” The woman followed him out of the bedroom, casting glances at the inert metal box. “So… the mice will just… go inside it?”

Alex nodded in the affirmative. “Once I activate the beacon, it will emit an ultrasonic signal that the mice find themselves irresistibly drawn towards. They’ll pile inside the cage, and once they are all inside, I shut the padlock remotely and you never have to see or hear them again.”

He continued exchanging pleasantries and reassurances with the woman as they descended in the elevator. The hot Pittsburgh summer hit them with the sweaty embrace of an old aunt as soon as they stepped outside. Fortunately for Alex, this part of town did not lack in shade from carefully cultivated oaks and maples diligently lining the residential streets. Finally parting with the woman—whose fear of rodents was dwarfed only by her repressed need for socialization—he settled in a remote corner of the park. The hour was too early for most children to be out of school; the only other visitors were young mothers and nannies rocking their toddlers on swings or letting them root through the nearby sandbox. Mindful that no one was paying him any attention, Alex unzipped his backpack and extracted a wide woolen headband. It jingled suspiciously as he carefully adjusted it around his head, pressing concealed bits of metal against his temples. An indicator on his app blinked and turned green.

“Alright, my sweets. Nobody in the apartment.” He smiled to himself. “Now let’s see what we can find.”

Tapping a quick series of commands into the app—whose interface, to a casual observer, could suggest anything between a financial spreadsheet and a series of Rorschach tests—he closed his eyes.