"Pillar of Heavens: A Thief's Redemption" is the first book in the epic YA fantasy series.

Caellia is a young fae on the run, framed for a crime she didn't commit. In a desperate effort to untangle the mystery of her past, she is caught by local law enforcement and loaded onto a ship bound to a distant land - toward the very man who wants her dead.

Silva is an idealistic knight, eager to find greater purpose in every mission. Charged with transporting Caellia, she struggles to reconcile her sense of duty with doubts about her young warden. When a pirate attack disrupts their voyage, they must reconcile their differences to survive - and to end the relentless pirate menace for good. 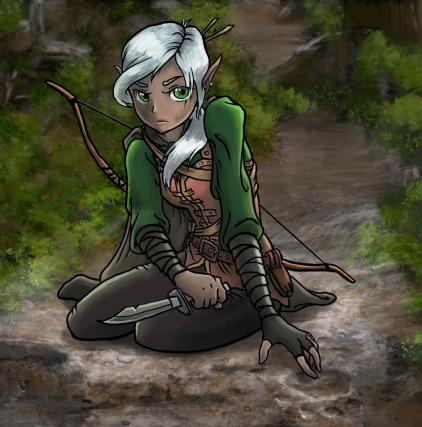 Pillar of Heavens: A Thief's Redemption

The heavy tome flew across the forest clearing, sparks trailing from its open pages, and landed with an undignified thump in a chipmunk nest. Had the nest’s inhabitants been versed in woodfae speech, they might have appreciated the colorful expletives from up above that accompanied the book’s trajectory. But even without understanding the finer twists of phrase, they knew that an immediate retreat from the glade was in order.

A slim figure swung down from the branches, silently landing at the edge of the clearing. Soot covered her young face and hands, and her long white hair frizzed in every direction, giving her the semblance of a dandelion that’s been dragged through the coals.

“So that’s how it’s going to be?” She glared at the alabaster scroll case still clutched in her left hand. Unlike the rest of her, the scroll was pristine, its smooth encasing catching the subtle moonlight filtering through the distant treetops.

«Your own parents couldn’t unlock my secrets.» Was the scroll whispering to her, or were her own thoughts chipping away at her confidence? «You’ll never succeed, Caellia.»

The girl scowled. “I’ll crack you yet.”

Her soft leather boots reflexively picked out patches of grass free of fallen leaves as she gracefully slid along the clearing’s edge. The nighttime forest, momentarily startled into silence by the outburst, was already reverting to its usual level of activity. A pair of owls exchanged hoots amid the upper branches, as if to say, “What undignified behavior! And from a woodfae, of all things. Why, I never...”

But the girl Caellia paid no heed to the consternation of birds. Kneeling down, she picked up the fallen tome, brushing dry pine needles from its crumpled pages. Thankfully, none had been torn or ruined. With effort, she stuffed the tome into the small satchel slung across her back. Glancing back at the spot where the book landed, she waved her free hand in a smooth upward gesture. The patch of withered autumn grass shivered and straightened out, covering the broken twigs. Even an exceptional tracker would be hard-pressed to notice any disturbance.

The branches of the mighty pine barely acknowledged her weight as she scrambled back up the tree. Some twelve feet above ground, three dented branches formed a broad natural bowl, shielding her from casual observation. A folded travel blanket draped over the rough bark, parts of it littered with wrinkled plantago leaves. On a nearby branch, an empty waterskin hung beside a hunting longbow and quiver.

Caellia settled back into her nest and reached for the waterskin. Closing her eyes, she whispered the familiar incantation. In an instant, fresh water bubbled over the rim, trickling into her hands. She took several long gulps, then splashed the rest on her face to scrub away the soot.

Her stomach grumbled. With a sigh bordering on a whimper, Caellia rummaged through the leaves until she found several leftover crumbs of bread, which she stuffed hungrily into her mouth.

This is ridiculous. She was supposed to be gone for two days at most, at the end of which she would return to her home village, triumphantly presenting the unlocked scroll to her parents. Instead, it had already been a week.

“If I knew you were going to put up so much resistance, I would’ve packed more food,” she muttered darkly. By this point, village scouts might be looking for her. Granted, she had been diligent about covering her tracks. Still, the fact that she hadn’t seen anyone in days was beginning to feel suspicious.

My parents must be furious, Caellia decided. They want to teach me a lesson. But if I can just crack the scroll, it’ll all be worth it.

She conjured a small orb of pale blue light in the palm of her hand—barely brighter than a candle, but enough to read by. Letting the wisp float beside her head, she pulled out the tome and opened it toward the end.

“Tried that one.” She flipped several pages forward. “And that. That one is useless. That one exploded in my face.” She glanced at the scroll as it lay before her, undaunted. “What if I encase you in tree sap? Then will you open?” She shook her head. With only a few dozen pages remaining in the spellbook, her options dwindled as quickly as her scant food supplies.

«Admit it, you can’t do it. Your parents were right to keep you away from their work.»

“They weren’t,” she snapped. “If they’d just gotten me involved at the start, we could’ve worked together.”

«They are the region’s foremost archmages. You’re just a petulant, spoiled little brat. Run home before you get into more trouble.»

Caellia gritted her teeth. Adamantly flipping the next several pages, she suddenly stopped.

There’s no way my parents would have tried this. She stared at the beginning of a complex incantation. At least half a page of warnings preceded the preparation steps. The orb of light dimmed to a purple hue, a reflection of her doubts.

What choice do I have? The rest of the village would know about her brazen theft by now. To show up without results… she’d never live down their scorn. Her peers’ imagined mockery echoed in her head: fae-lure of a mage! You’re an embarrassment to your family. Go live with the humans!

“I can’t go back empty-handed,” she whispered. “This could work. Then they’ll have to forgive me.”

Caellia boosted the glowing light, squinting at the tightly nested script, and began chanting. The melodious speech swirled around her, each phrase condensing into a glowing sigil in midair. Without interrupting the chant, she gestured with her hands, orchestrating the ever-growing number of sigils into an orbit encircling both herself and the alabaster scroll. Despite the chill autumn air, beads of sweat coursed down her temples. Her voice rose ever higher, fighting to escape her lungs and flee into the wilderness. The orbiting sigils picked up speed, their colors blending into streaks of light—violet, green, azure, orange—a kaleidoscope bright enough to blind anyone passing by. Suddenly, a rune on the scroll flared intensely. Thousands of gossamer strands of light bloomed between the scroll and Caellia’s body, wrapping them both in a tight glowing web. The chant turned to an abrupt cry of pain, and the swirling sigils exploded outward, dissipating into the air.

The clearing was dark once again. Even the moonlight receded, hidden by a passing cloud.

Shivering violently, Caellia opened her eyes. Sweat streaked down her dark face. With two shaking hands, she picked up the scroll and stared at it. Other than a new rune where a plain white surface used to be, it appeared unchanged.

“I bound us together.” Caellia’s whisper quavered with exhaustion. “Do you hear me? We’re connected as one. Now you must reveal your secrets. Open.”

She tugged at the scroll lid. A couple of faint sparks fluttered into the air and vanished. The lid remained shut.

With an exhausted moan, she collapsed against the tree trunk, fighting back tears of frustration. Absently repeating her earlier gesture, she reached for the waterskin and tilted it towards her lips.

But no water came out.

It took her a moment to realize that something went amiss. Frowning, she repeated the incantation several more times, again with no results. Her attempt to conjure a light orb was similarly unsuccessful.

An icy fist squeezed her heart. She struggled to breathe; white flecks swam through her blurry vision. I must be weary, that’s all, she repeated over and over. The last spell was far more complicated than anything she’s ever cast. A brief respite would set things right.

But half an hour later—though it felt like an eternity—she was in no better shape than before. The waterskin mocked her with its stubborn emptiness; the light refused to materialize. Even the mind-numbingly familiar first page of the tome—a practice spell she’d cast so often, it may as well have been etched on the inside of her eyelids—resounded with a hollow void no matter how often she repeated the words. Like a soldier sprawled on a battlefield, she was poking at an unresponsive limb, not realizing that it had been severed by a traumatic blow.

Full-blown panic set in. If her innate magic was blocked, she could do nothing with the scroll short of bashing it against the rocks—which she’d already tried. Already, she could feel her passive enchantments fading off. The hoots of owls sounded unusually muffled; and when a hare dashed along the forest floor beneath her dangling feet, she started—normally she’d have heard its leaps well in advance.

Her stomach cramped with desperation—and this time, it had nothing to do with hunger.

«Crawl back to your parents,» the voice inside her head insinuated. «Beg for forgiveness.»

“Please, no,” she whimpered at the dispassionate air. Even the night breeze seemed to shy away from her.

«And pray that somehow, they can still fix you.»